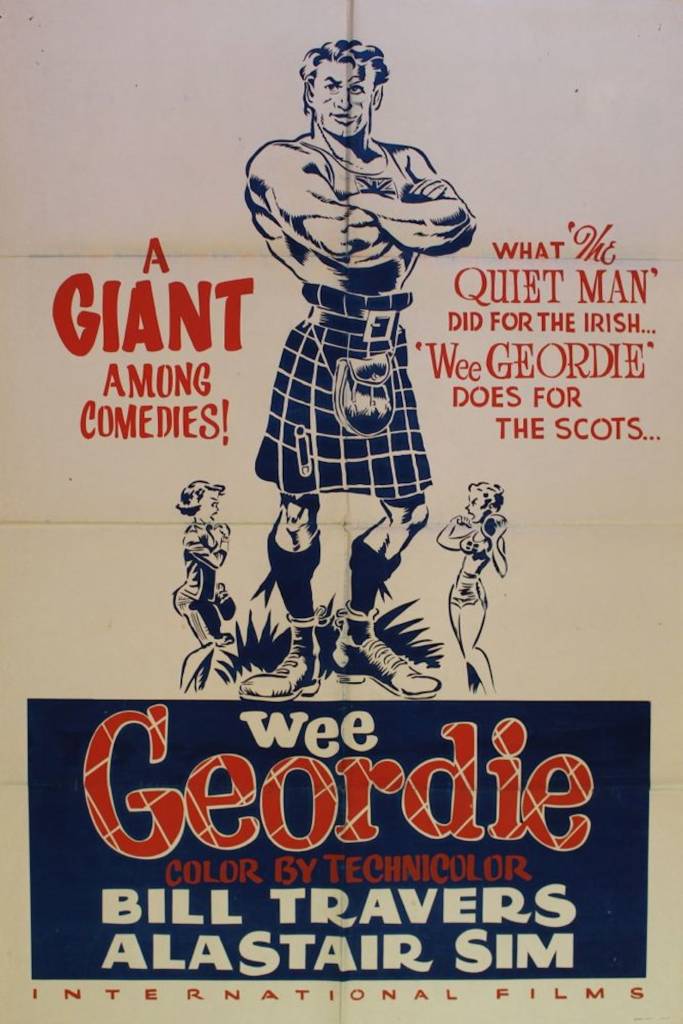 Original Wee Geordie (1955) movie poster. British film directed and co-produced by Frank Launder based on David Walker’s 1950 novel on the same title. Plot: Concerned with his small stature, a young Scottish boy, Geordie, applies for a mail-order body building course, successfully gaining both height and strength. Geordie works as assistant to his father who is the local laird’s gamekeeper. One day they are dragging a dead stag home when his father complains of chest pain, Geordie carries him home where he subsequently dies making Geordie the new gamekeeper. At the age of 21, he displays a talent for hammer-throwing and is selected to represent Britain in the 1956 Olympic Games in Melbourne, Australia. Unhappy to be away from home Geordie finds it difficult to be enthusiastic about training on board ship. The Danish female shot putter Helga takes a shine to Geordie and talks him out of his mood and tells him she loves him before they disembark. Geordie puts on his late father’s kilt in front of the selectors who disapprove until he tells them “no kilt, no throw!” He comes out last in the opening ceremony in his kilt causing a big fuss as the Olympic Committee get a telegram saying the kilt is not to be worn. Again Geordie fails with his first two throws, Helga speaks to him, but he still feels out of place and misses home, then he finds inspiration by recalling his old flame Jean’s encouragement and throws a world record. The radio commentary describes how Helga kisses Geordie in congratulations. Jean is heartbroken. What will come of his return home to Jean?