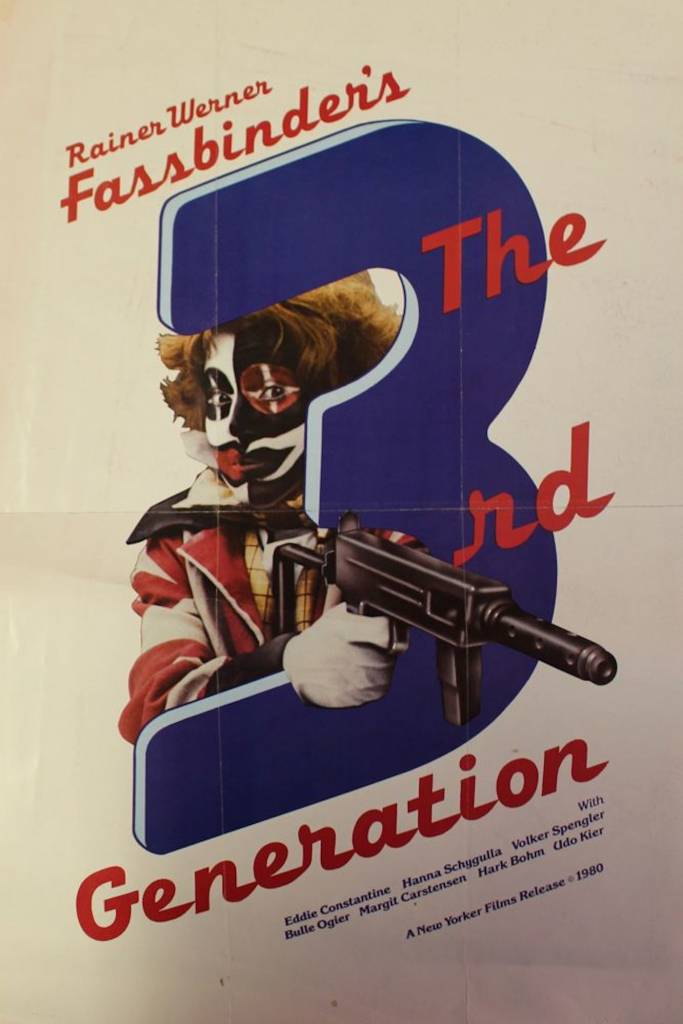 Original The 3rd Generation (1979) movie poster. A West German black comedy about terrorism, written and directed with cinematography by Rainer Werner Fassbinder. Plot: P.J. Lurz (Eddie Constantine), an industrialist with an office in a Berlin high-rise, informs his American headquarters that the company has difficulty selling its security-related computer systems to the West German government. Susanne (Hanna Schygulla), Lurz’s secretary, receives a phone call with the message: The world as will and idea, a code phrase among a secret group of thirty-something middle class leftists and would-be terrorists to which she belongs. Susanne begins alerting the members of the terrorist cell of an upcoming meeting. P.J. Lurz is informed by Gerhard Gast (Hark Bohm), the inspector-general of the police and Susanne’s father-in-law, that he is being watched and is under police protection. August Brem (Volker Spengler), the leader among the terrorists, is in fact a double agent in secret contact with Lurz who wants to boost sales of his security computers by financing the terrorist group. Times are tense and get even worse when Paul, a new member, is gunned down by the authorities at a restaurant. Edgar (Udo Kier), Susanne’s husband, witnesses his death and sees his father, Officer Gast, at the scene. In order to finance their activities some of the  terrorists rob the bank. They frantically change their looks and names and flee from their homes. How long can the terrorists continue to commit crime and run from the authorities?