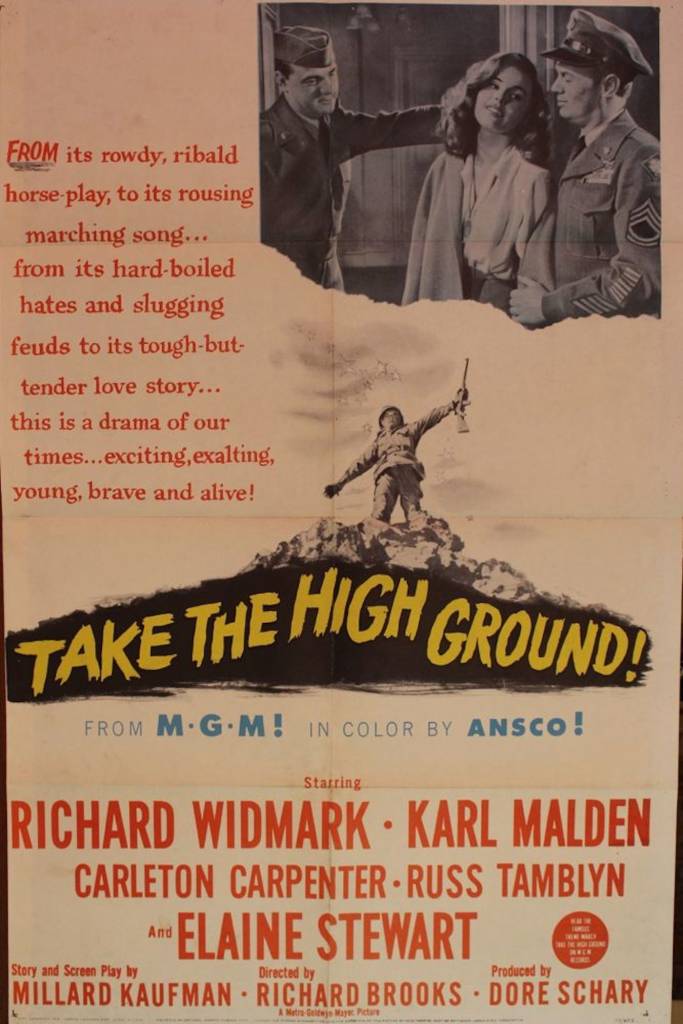 Original studio stamped Take the High Ground (1953) movie poster and 2 lobby cards. Plot: In May 1953, Sgt. Thorne Ryan (Richard Widmark), who once fought bravely in Korea, now serves as a hard-nosed drill instructor to new Army recruits at Fort Bliss, Texas. But is he really the man he is often described as? His fellow instructor, and friend, Sgt. Laverne Holt (Karl Malden), helps him to face the ghosts of his past experiences in Korea. One night in a bar across the border in Juarez, Mexico, Sgt. Ryan meets a lady, Julie Mollison (Elaine Stewart), who begins to turn his life around. One day, recruit Lobo Naglaski (Steve Forrest) visits the camp chaplain to confess his murderous feelings toward Ryan, but comes to see that the sergeant has very little time in which to do a tough job. Tensions arise between Ryan and Holt, both over Ryan’s callous treatment of the men and Holt’s relationship with Julie. Ryan puts his men through increasingly tough drills, and during a bitter confrontation one day, Holt slugs Ryan and walks away. Later, Ryan calls on Julie at her apartment, and they fall into a passionate embrace. When she resists his further advances, however, Ryan becomes insulting, casting aspersions on Julie’s virtue and chiding her for having left her late husband. Will he be able to reconcile what he has done?