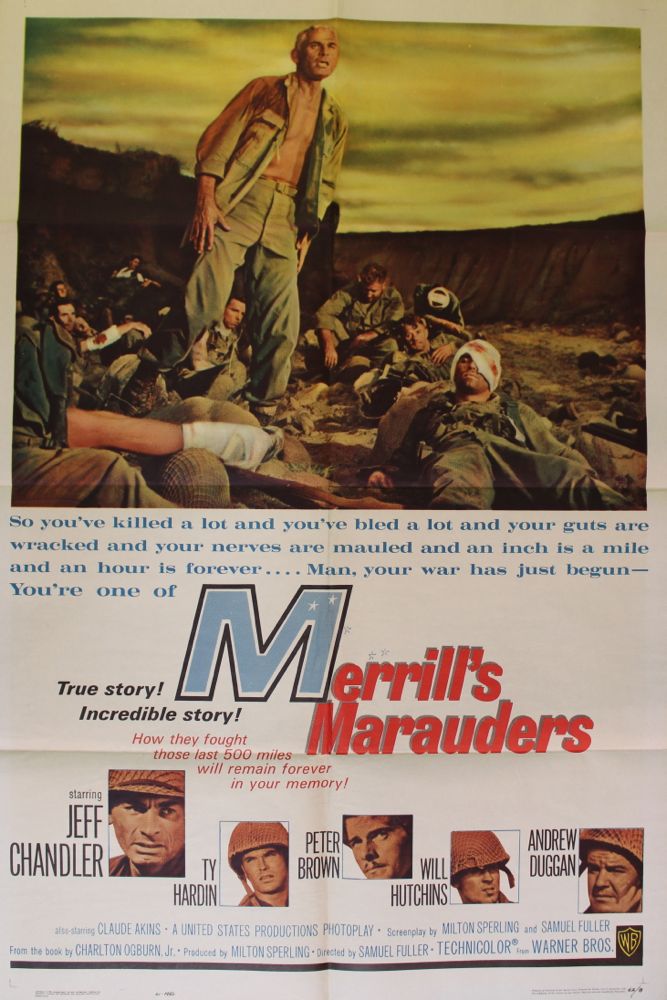 Original studio stamped Merrill’s Marauders (1962) movie poster along with a set of 8 original lobby cards. This Cinemascope war film directed and co-written by Samuel Fuller is based on the exploits of the long range penetration jungle warfare unit of the same name in the Burma Campaign.
Plot: Brigadier General Frank D. Merrill (Jeff Chandler) leads the 3,000 American volunteers of his 5307th Composite Unit (Provisional), aka “Merrill’s Marauders”, behind Japanese lines across Burma to Myitkyina, pushing beyond their limits and fighting pitched battles at every strong-point. The film begins with off-screen narration over black-and-white historical footage of the WWII Burmese campaign. The film then segues into Technicolor as we observe Lt. Stockton’s (Ty Hardin) platoon moving through the jungle toward their first objective, the Japanese-held town of Walawbum where they carry out a successful raid. Afterwards, General Joseph Stilwell (John Hoyt) arrives in Walawbum to order Merrill on another objective, the railroad center of Shaduzup, and ultimately the strategic airstrip at Myitkyina. The unit continues their march through hellish swamps before taking Shaduzup from the enemy. The brigade continues their mission up steep mountains for several days and nights before digging in just outside Myitkyina. As night falls, the unit endures a massive artillery barrage. The dawn then brings a Japanese banzai attack, which Merrill’s men successfully repulse. Then, while desperately rallying what is left of his unit to move on to the base at Myitkyina, the general suddenly collapses from a heart attack. The men, led by Stockton, slowly rise up and trudge onwards towards Myitkyina as an incredulous “Doc” (Andrew Duggan) cradles Merrill in his arms.
SKU: MP1021
Measurements: Poster (27″W X 41″H) Lobby Cards (14″W X 11″H)