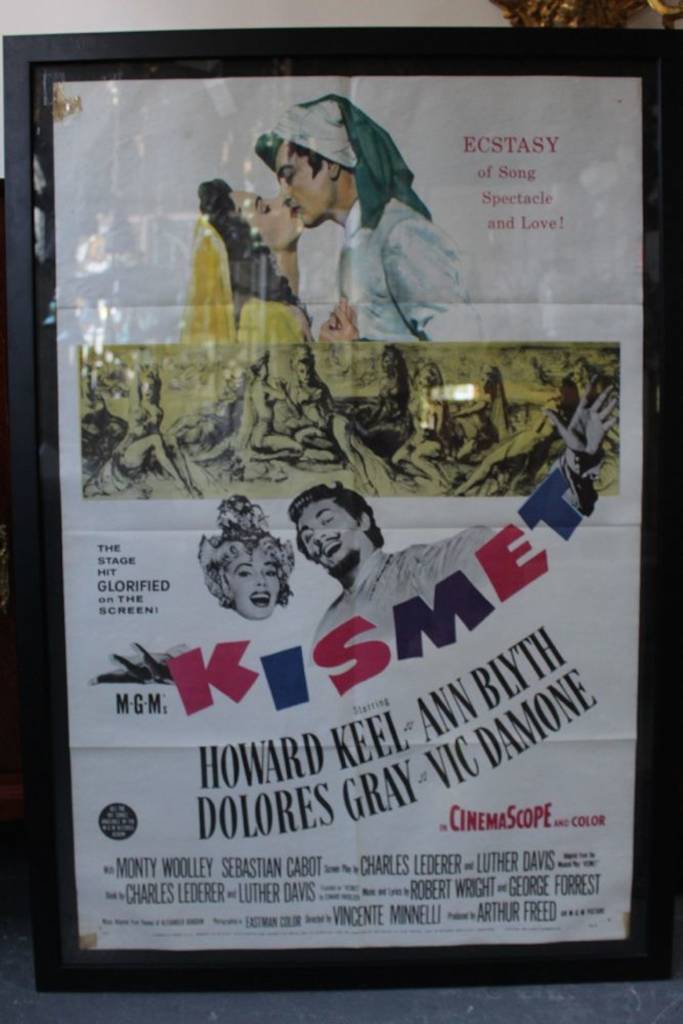 Original Kismet (1955) movie poster along with 8 original lobby cards. Plot: In old Baghdad, an impoverished poet goes to the marketplace to sell his rhymes for food. The poet sets up shop in a spot usually reserved for a man named Hajj. The poet is kidnapped and taken to the desert tent of Jawan, an elderly thief. Jawan, assuming that the Poet is Hajj, orders him to reverse the curse Hajj put on him fifteen years ago, which led to the kidnapping of Jawan’s beloved son. The Poet asks for one hundred gold pieces to reverse the curse; Jawan agrees, and returns to Baghdad to look for his son. The Poet orchestrates an elaborate “curse-reversal” scheme that enables him to sneak out; he finds his daughter Marsinah and convinces her that he will be killed unless they flee Baghdad. Word spreads that the Caliph’s bride, Marsinah, was not there when the Caliph came to claim her. Since the “curse reversal” seemed to have worked, the Poet leaves Marsinah and returns to the palace. The Wazir wants to kill the Poet because he believes he has dangerous supernatural powers, but Lalume convinces her husband to keep the Poet in the palace and use his power. The Poet tells Lalume that he is worried about Marsinah, and Lalume suggests that she come to live in the palace. The Wazir is still alive, however, and his guards capture the Poet and sentence him to death. Will the Poet get out of this one or has his fate been sealed?