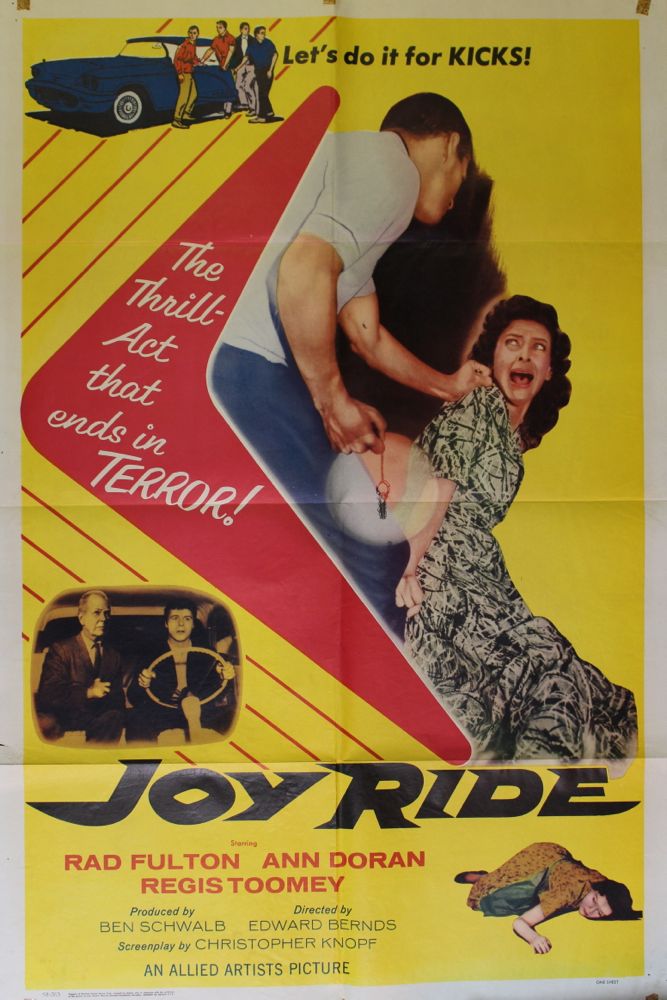 Original studio stamped Joy Ride movie poster from 1958 along with a set of 8 original lobby cards.

Paul (Rad Fulton) and three other punks, Arnie (Nicholas King), Vince (Robert Levin) and Dirk (Jim Bridges), are admiring a parked sports car and intending to take it for a joy ride, when they are surprised by its owner, Miles (Regis Toomey) who orders them away and is met with a barrage of fifthy names. A few nights later they break into Miles’ garage and he catches them and threatens to call the police. Paul tells him they want the car for a ride and they will have it sooner or later. The young hoods then launch a campaign of terror against Miles and his wife (Ann Doran). Paul realizes he has more pleasure in frightening Miles than in trying to get the car, and one day they force their way into the Miles home and brutally attack Mrs. Miles after she refuses to produce the car keys. Now thinking that Miles is in his power, Paul meets him to take delivery of the car. When Paul steps into the car, Miles pulls a gun and orders him to drive out of town at a breakneck speed. The more frightened Paul becomes, the more dangerously Miles makes him drive, until finally, in tears, Paul begs to be allowed to stop his “joy ride.” Miles directs him to pull up in front of the police station and Paul’s arrest is followed by that of the other three boys.