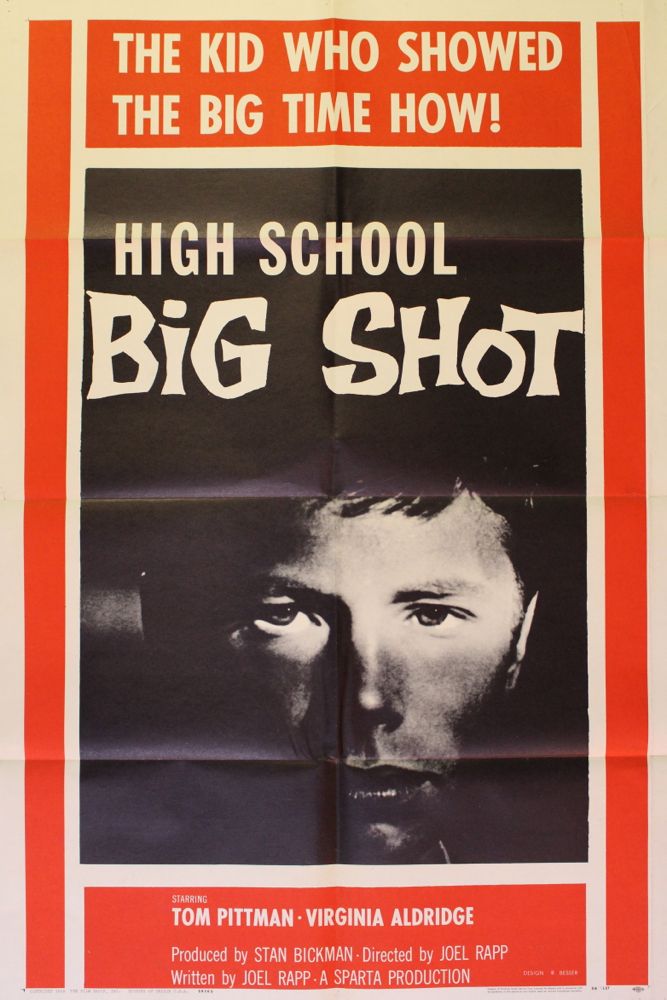 Original studio stamped High School Big Shot (1959) movie poster along with a set of 8 original lobby cards.
Plot: Starring Tom Pittman as Marv Grant, a smart high school student whose plans for getting a college scholarship are threatened by his alcoholic father played by Malcolm Atterbury, and his relationship with the most popular girl in school, Betty Alexander. After getting caught writing a paper for Betty his professor withdraws his recommendation from Marv’s college application, without which Marv has no chance of earning a scholarship. At his part-time job at the docks, Marv overhears his boss plotting a drug transaction worth $1 million cash. Marv plots to steal the money, he tells Betty about the pending robbery to entice her to marry him, and she apparently accedes. In reality she secretively tasks her boyfriend, Vince, to steal the money from Marv. Marv steals the money, but things then go horribly wrong when it’s discovered Marv’s father has hanged himself, then Vince and two accomplices intervene and shoots one of Marv’s unarmed associates, and he is horrified. When Betty arrives on the scene soon afterwards, Vince accuses her of making him do this, and he kills her, too. Vince’s accomplices flee, but the police soon arrive. Marv is arrested and the money falls into the water, being lost.
SKU: MP1004
Measurements: Poster (27″W X 41″H) Lobby Cards (14″W X 11″H)