“Footsteps in the Night” Set of Lobby Cards 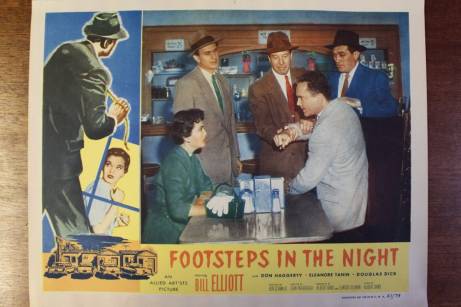 Original studio stamped Footsteps in the Night (1957) a set of 8 original lobby cards.
Plot: A gambling addict is the logical suspect in the death of a card-playing neighbour who caused his relapse – too logical, think the two detectives on the case. Fred Horner’s strangled body was found in Henry Johnson’s (Douglas Dick) motel apartment. Lieutenant Andy Doyle (Bill Elliott) of the Los Angeles sheriff’s department learns that Johnson had been an avid card-playing gambler, and had frequently argued violently with the deceased. Trailing Johnson’s fiancée, Mary Raikin (Eleanore Tanin), the police capture Johnson, who insists he did not kill Horner, but fled in panic when he discovered his body in his room after an absence of only a few minutes. It is discovered that a wealthy tenant of an adjacent motel, Bradbury, bears a resemblance to the murdered man, and in order to set him up as a decoy, Doyle suggests the Bradbury spread the word he is leaving for his home the next day. That night, the real killer, Pat Orvello (Gregg Palmer), sneaks into Bradbury’s room to rob him, but is shot and captured by Doyle and his men. Earlier, the robber/killer had mistaken the neighboring motels, killed the wrong man in his robbery attempt, and had left the body in Johnson’s room.
SKU: MP1003
Measurements: Lobby Cards (14″W X 11″H)