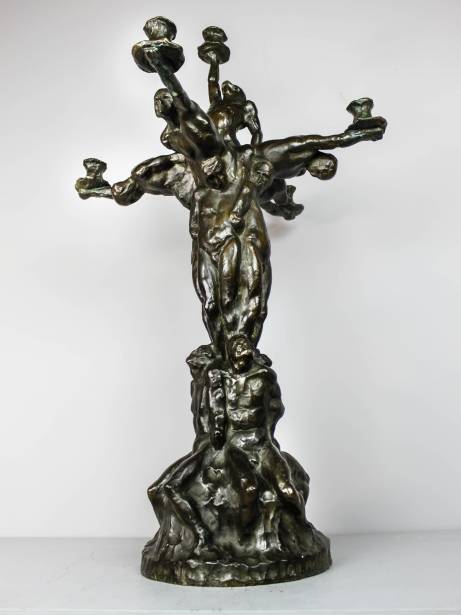 “The Gates of Hell” were commissioned by the Directorate of Fine Arts in 1880 to famed 19th century sculptor Auguste Rodin. Rodin, who worked on this commission for over 37 years until his death in 1917, was heavily influenced by the work of Michelangelo’s “The Slaves” and Lorenzo Ghiberti’s “Gates of Paradise” at the Baptistery of St. John in Florence.

The inspiration for the Gates of Hell came from Dante’s 13th Century “The Devine Comedy” and it’s first section “The Inferno” which tells the story of the the soul’s journey towards God and the recognition of sin in the inferno. Rodin’s motivation is apparent in the gates as disoriented figures appear to emerge from the doors in a powerful message of universal suffering and the human condition.

Rodin accepted the commission for the gates because it allowed him use of a studio space at the Hôtel Biron in Paris, France. His work on the project brought him considerable fame, admiration and influence among the artist community at the time. Many sculptors took inspiration from Rodin’s vision to create their own works and these artists were commonly known as “The Circle of Rodin”. Some well known members of this circle include Alfredo Pina, Naoum Aronson, and Camille Claudel.

F.B. Mathews was an American artist who attended the École Des Arts Décoratifs in Paris. He is thought to have fallen under the influence of Rodin and his circle, as evidenced by this lifetime cast, signed candelabra which has striking similarities to Rodin’s early conceptual sketches of the Gates of Hell.

The use of the male form is abundant in this piece as the abstract forms appear to break free, move up from the base, and away, in an expression of freedom and light. The concept of the human struggle in this form strongly parallels the works of Rodin and his circle.