“Crime in the Streets” Movie Poster 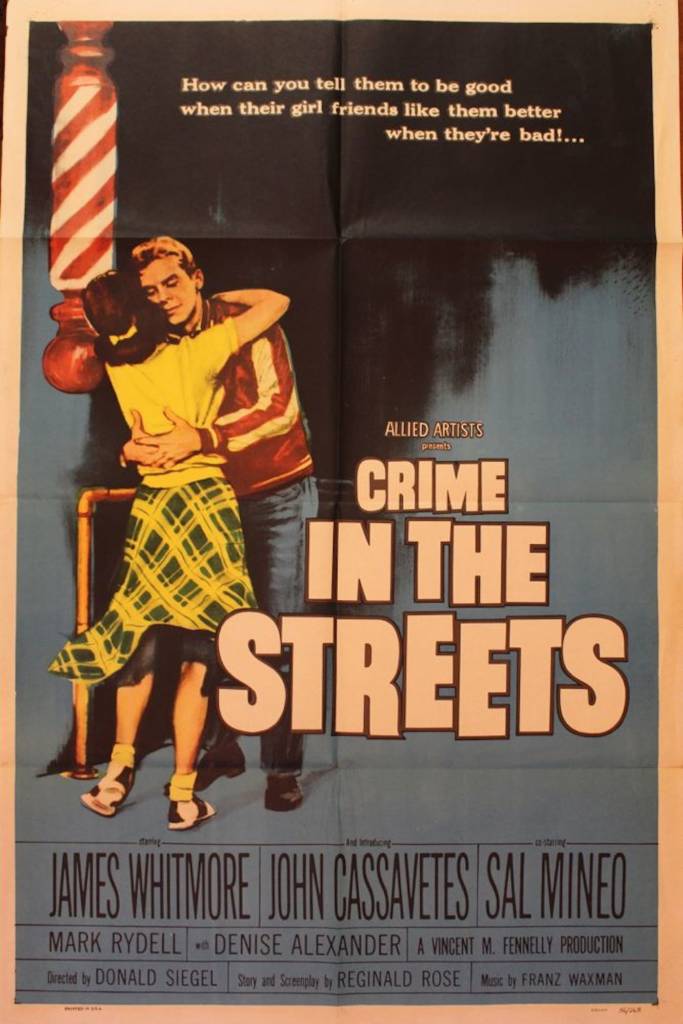 Original studio stamped Crime in the Streets (1956) movie poster. Plot: On New York City’s mean streets, the boys join gangs at 15. Frankie Dane (John Cassavetes) leads the Hornets. After a rumble between the Hornets and the Dukes a youth is taken captive and threatened with a zip gun by Lenny Daniels, one of the Hornets. When a neighbor, McAllister (Malcolm Atterbury), goes to the cops after seeing this, Lenny Daniels (Jimmy Ogg) is arrested and sentenced to a year in jail. Frankie vows to kill the old guy, hatching a plan using Lou (Mark Rydell), who smiles and smokes, and “Baby,” (Sal Mineo) the 15-year-old son of an immigrant shopkeeper. Ben Wagner (James Whitmore), the social worker at a neighborhood settlement house, gets wind of the plan and tries to break through to Frankie to no avail. Frankie’s brother Richie (Peter Votrian), who’s about 12, worships and fears Frankie; he also figures out what his brother is up to. The three conspirators fake going to bed, (to later use as their alibi) to wait until the agreed upon time to act. McAllister is trapped in an alley at 1:30 in the morning by the three. Richie stops his brother just-in-time, but ends up with a knife held to his throat by angry Frankie, while McAllister and other two run off. Wagner appears due to the commotion, and watches as Frankie finally comes to his senses and lets his brother go. He is then accompanied by Wagner to the approaching police.