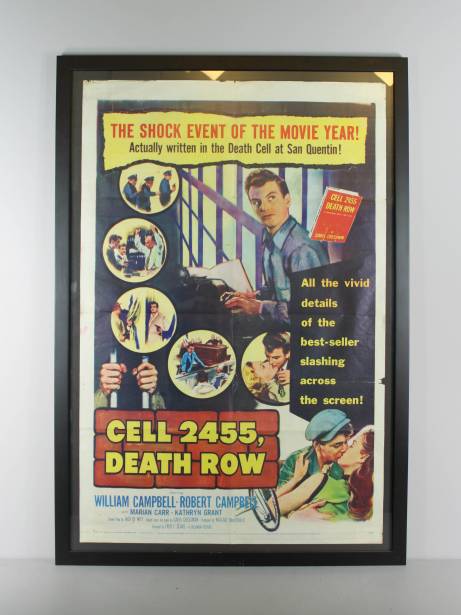 Ca. 1955 Original vintage advertisement for the original motion picture Cell 2455, Death Row. Plot: Whit (William Campbell), condemned and awaiting execution, reviews the events of his life that has brought him to Cell 2455 on San Quentin’s Death Row, a story he had told in a autobiography that became a sensational best-seller. As a boy (R. Wright Campbell), the young Whit stole groceries to help feed his impoverished family, later moving on into major crime to impress a young gang moll, Jo-Anne (Kathryn Grant), and turns into a cold-blooded thug when he is repudiated by the girl he loves, Doll (Marian Carr). He is arrested and tried as the infamous Lover’s Lane Bandit. In cell 2455, he studies law to the point where he wins stay after stay, twice within minutes of his scheduled execution.