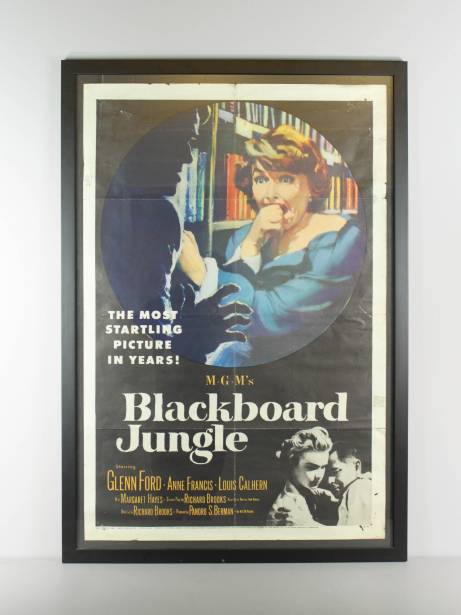 Ca. 1955 Original vintage movie poster for the film “Blackboard Jungle.” Plot: A social commentary film about war veteran Rick Dadier (Glenn Ford) is one of three new teachers hired at North Manual High School, an inner city boys school. This is his first teaching assignment, which he needs to support himself and his insecure pregnant wife, Anne (Anne Francis). Despite Principle Warnecke’s (John Hoyt) assertions to the contrary, Dadier quickly learns that the rumors of student discipline problems at the school are indeed true. The established teachers at the school try to counsel the newcomers, all inexperienced in such situations, as how best to handle the rowdy students. When Dadier tries exerting his authority, he receives much hostility from both students and faculty, culminating with his pregnant wife receiving anonymous letters with false accusations that he is romantically involved with another woman at school. Dadier believes the student leaders against him are Artie West (Vic Morrow), but more specifically Gregory Miller (Sidney Poitier), who he thinks uses the fact of being black as a means of racial provocation. Dadier has to decide either to leave and teach at a “real” school, or stay and figure out how to get through to his students. If he decides to stay, he has to figure out who the real disruptive influences are, especially as they have resorted to attacks of a personal nature that affect especially Anne.